Goldberg Violations
For this project I took the 1955 Glenn Gould recording of Bach’s Goldberg Variations, and re-composed it using pitch/time-shifting software which enables precise manipulations of individual notes within a polyphonic audio file allowing me to re-pitch, stretch/compress, and even mute specific notes while leaving other simultaneously played ones intact.
Dealing directly with a physical medium (sound) rather than an abstracted representation of one (such as a notated score) had me constantly relating to such concrete aspects as Glenn Gould’s interpretation and touch, the sound characteristics of the recording, and even the accumulation of noticeable digital artifacts caused by my own manipulations and by the limitations of the software.
All of these immediate sound aspects have thus become intrinsic to the project as much as the “classical” compositional choices regarding the shifting of pitches and rhythms.
This is a work in progress – more Violations will be gradually added to this playlist.
Read more
←
→ 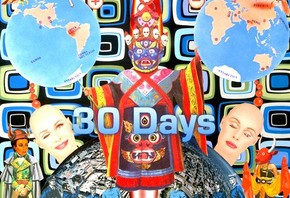 Vancouver-based Peppermill Records is not your typical record label. First off, they’re a net-label…

Ghost Moth - 1111 the Duality and the Hidden Third
Next:

My Castle of Quiet  ————-  Ghost Moth Haunt the Castle; Live Session 11th November 2009  —————–  When you’re already in a dance with noise and free improvisation, the Kosmische is less than one membranous step away.